Thank you for your tremendous support over the past years. 2021 was another successful year of fundraising and your gifts have made all the difference in our quest to see the Pulliam Community Building vibrant again in Loveland. This is a summary of last year and a look forward as well.

The first two phases of construction were completed by the City of Loveland before 2021 began at a cost of $3,717,841. Our foundation’s portion was $1,250,000 of that amount. No further renovations were done in 2021. The city wanted to raise more funds to prepare for large ticket items such as heating and air conditioning which are estimated to be $2.5 million alone.

Gifts received by our foundation were $298,134. Notable donations included $50,000 from the Boettcher Foundation. The Community Foundation of Northern Colorado, FNBO, and significant private donors boosted the annual gifts received.

The Pulliam Charitable Trust continues to be a prime donor. Even though the facility was named the Loveland Community Building when it first opened in 1938, the city renamed it to the Pulliam Community Building to recognize the philanthropic generosity of the D.T. and Lillian Pulliam family.

Many of you became repeat donors, which demonstrates significant support. Our donor base is broad. Our support comes from our board, capital campaign committee, corporations, trusts, charitable foundations, and Loveland residents who believe in the community building and how it will benefit our city.

Interestingly, I don’t think the pandemic has impacted our fundraising efforts much, but inflation definitely has and will increase the project’s cost.

As a foundation, we made a commitment to raise $2,650,000. From the table below, you can see that we have about $800,000 left to go. The impact of inflation directly affects the total cost of the project and what the city will eventually spend to complete the construction. Of course, that affects our goal of seeing the building in use again. It is imperative that final construction continues sooner rather than later for the most cost effective use of our donor dollars and the city’s funds. 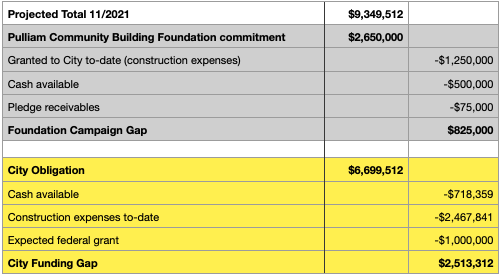 Total cost of completing the construction was estimated by the city in November of 2021 to be $9,349,512. That is up about $2 million over the previous projection.

The city received good news that their grant request from the federal government is on the short list and that $1 million would help their share of the project significantly as shown in the table.

We are excited to report that Kathi Wright has agreed to be on our board of directors again. Her leadership is so valuable to us and our community.

Although it is hard to place a quantitative value on it, the interest level in the Pulliam Community Building is at an all time high. Last year I gave more tours of the building than ever and shared our successes with potential donors from Colorado and two other states.

The combination of philanthropic community gifts and the city’s generosity is the reason we will see the community building come to life again in Loveland.

We can see the finish line but can’t cross it yet. There are several exciting potential opportunities in front of us and I hope we can share that news soon. We appreciate your continued gifts and support.